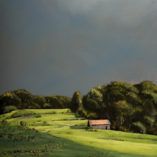 A strong stormy sky backlights this farm house in the Dullstroom area.

Dullstroom, also known as Emnotweni[2] is a small town in Mpumalanga province, South Africa, and along with Underberg, it is one of South Africa’s premier flyfishing destinations. The town features the highest railway station in South Africa at 2,077 metres (6,814 feet) above sea level as well as at the foot of De Berg, the highest point in the province at 2,332 metres (7,651 feet). The town lies 35 kilometres (22 miles) north of Belfast and some 53 kilometres (33 miles) south-west of Lydenburg.

Dullstroom was established in 1883 by Dutchman Wolterus Dull to settle Dutch immigrants. During the Second Boer War the town was destroyed and most of the settlers returned to the Netherlands.

It was proclaimed on 9 October 1893 and named after a merchant from Amsterdam, Wolterus Dull, chairman of a committee which rendered assistance to families who had suffered losses during the First Anglo-Boer War. The element stroom, ‘stream’, refers to the Crocodile River nearby. One of the coldest towns in South Africa, Dullstroom is the only place in the country where beech and elm trees grow; they were planted by Dutch colonists.