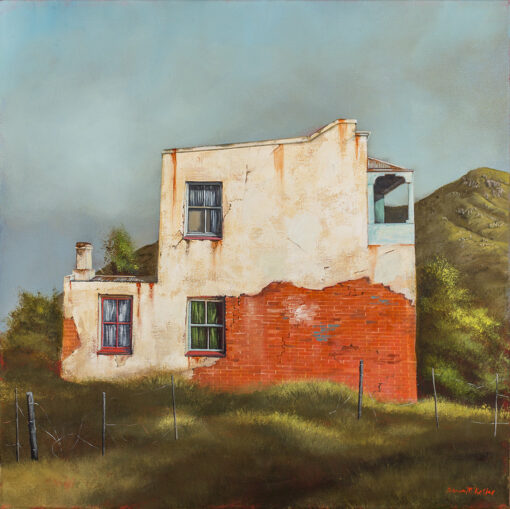 The crumbling and gritty historic buildings in Woodstock exude so much character and history, Donna has captured the romance and drama of the buildings that have witnessed so much over the years.

Woodstock is a suburb of Cape Town, South Africa. It is located between the docks of Table Bay and the lower slopes of Devil’s Peak, about 1 kilometre (0.6 mi) east of the city centre of Cape Town. Woodstock is served by Woodstock and Esplanade railway stations, and has the postal code 7925 for street addresses and 7915 for post office box deliveries.

The area was inhabited by Khoikhoi until the arrival of Dutch in the 1600s, Their subsequent decline followed as a result of fighting over land with the Dutch, imported European diseases and eventual assimilation into the Cape community.[2] Three freehold farms (Zonnebloem, Leliebloem and Roodebloem) were established on the slopes of Devils Peak in 1692 and as the area became populated it became known as Papendorp – after Pieter van Papendorp, who had settled in the area during the mid-eighteenth century. By the middle of the 19th century, especially after the arrival of the railway line, Woodstock had become a fashionable seaside suburb with cottages next to the sea and a beach which stretched until the Castle of Good Hope. In the age of sail a number of violent storms led to many spectacular shipwrecks along the beach. After a brief stint as New Brighton the residents voted in 1867 at the Woodstock Hotel to change the area’s name to Woodstock.[3]

With the massive land reclamation of Table Bay in the 1950s to create the Cape Town foreshore, Woodstock beach was lost, and combined with the increasingly industrial nature of the suburb, Woodstock ceased to be a seaside resort. Woodstock however managed to remain integrated during Apartheid and survived being declared a ‘whites only’ area with the attendant forced removals and demolition of houses as happened in nearby District Six. As a ‘grey’ area, many coloured and black people started to move into Woodstock during the 1970s and 1980s, laying the foundation for the urban renewal which was to start in the late 1990s.