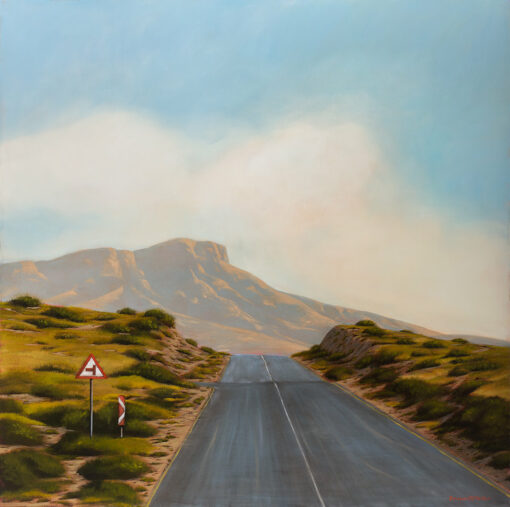 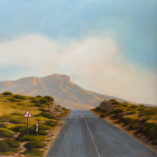 This painting formed part of Donna’s exhibition entitled “On the Road Again”, which was held in 2015 at The Studio Kalk Bay. The underlying theme being movement, change, something new. This painting hints at the unknown over the rise of the hill.

About the Klein Karoo (Little Karoo)

The Little Karoo is separated from the Great Karoo by the Swartberg Mountain range. Geographically, it is a 290 km long valley, only 40–60 km wide, formed by two parallel Cape Fold Mountain ranges, the Swartberg to the north, and the continuous Langeberg–Outeniqua range to the south. The northern strip of the valley, within 10–20 km from the foot of the Swartberg mountains is most un-karoo-like, in that it is a well watered area both from the rain, and the many streams that cascade down the mountain, or through narrow defiles in the Swartberg from the Great Karoo. The main towns of the region are situated along this northern strip of the Little Karoo: Montagu, Barrydale, Ladismith, Calitzdorp, Oudtshoorn and De Rust, as well as such well-known mission stations such as Zoar, Amalienstein, and Dysselsdorp.

Farmlands along the well-watered, fertile foothills of the more than 2000 m high Swartberg Mountains (in the background) along the northern strip of the Little Karoo.

The Little Karoo can only be accessed by road through the narrow defiles cut through the surrounding Cape Fold Mountains by ancient, but still flowing rivers. A few roads traverse the mountains over passes, the most famous and impressive of which is the Swartberg Pass between Oudtshoorn in the Little Karoo and Prince Albert on the other side of the Swartberg mountains in the Great Karoo. There is also the main road between Oudtshoorn and George, on the coastal plain, that crosses the mountains to the south via the Outeniqua Pass. The only exit from the Little Karoo that does not involve crossing a mountain range is through the 150 km long, narrow Langkloof valley between Uniondale and Humansdorp, near Plettenberg Bay.