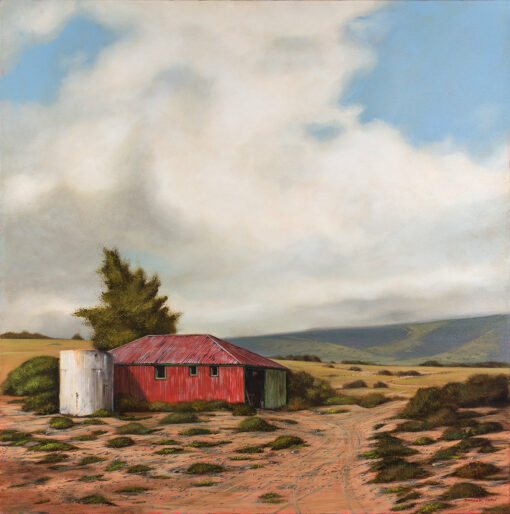 Enquiry about #714 The Red Barn

A freshly painted red barn, depicted against a building bank of clouds.

The Karoo is a semi-desert  of South Africa. The Karoo is partly defined by its landscape, geology, and climate — above all, its low rainfall, arid air, cloudless skies, and extremes of heat and cold. The Karoo also hosted a well-preserved eco-system which is now represented by many fossils.

The Karoo formed an almost solid barrier to the interior from Cape Town, and the early explorers and hunters on the way to the Highveld  denounced it as a fearsome place of great heat, great frosts, great floods and great droughts. Today it is still a place of great heat and frosts, and an yearly rainfall of between 50–250 mm, though on some of the mountains it can be 250–500 mm higher than on the plains. However, underground water is found throughout the Karoo, which can be tapped by boreholes, making sheep farming possible.

Donna McKellar is a South African fine artist living and painting in Cape Town. She is well know for her large scale South African and landscapes.

She paints enigmatic and peaceful paintings of South African landscapes, and its remote buildings, Industrial urban moments, and large sea vessels. Her works are both highly technical and emotive in nature. The themes are centered around the idea of urban decay; loss of beauty and strength and relate to the common man’s everyday existence. She is inspired by various aspects of her own everyday life and perceptions as a painter, such as light and shadow; architecture and geography, memory and emotion.

Donna’s original artwork can primarily be found  in Franschhoek at the MANZART Gallery and at The Studio Art Gallery, Simonstown, Harbour Bay Centre. The Studio carries a variety of Donna’s artists prints as well as a few originals.