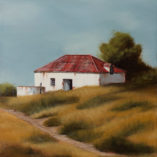 An unused farm building sitting on the hill on a farm in Caledon.