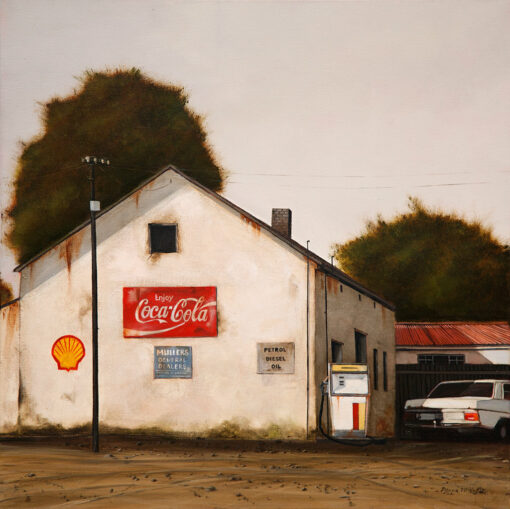 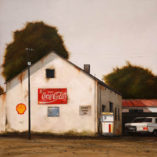 This roadside Pniel garage is found in the town of Pniel and has always been a favourite scene of Donna’s. She has painting this scene over and over since she discovered this picturesque scene, watching it change over the years. Sadly, today is it completely revamped and no longer bears any resemblance to the quaint history depicted in Donna’s paintings.

Pniel is a settlement in Cape Winelands District Municipality in the Western Cape province of South Africa. Pniel is nestled at the foot of Simonsberg, and lies just outside Stellenbosch. Not only does the little village lie surrounded by vineyards and mountains in one of the most wonderful spots in the Western Cape Province, but its history is very interesting. Pniel started out as 19 hectares of land donated from the farm De Goede Hoop established as a mission settlement for the landless and homeless slaves of 1842 (the British Slavery Abolition Act of 1833 abolished slavery throughout most of the British Empire, including 40 000 slaves in SA). The name is of biblical origin (Genesis 32:30), referring to the place where Jacob wrestled with God; it means ‘face of God’.[2]

Today its oak-lined main road is filled with quaint houses, some of the them built for the freed slaves by Sir Herbert Baker (hence the humps in the road, to make sure you take the time to look around you!), whilst its name, which means ‘face of God’, is taken from Genesis 34 verse 30. In 1843 a further 43 hectares were added to Pniel from the neighbouring farm, Papier Moulen, and the whole area was subdivided into plots and granted to emancipated slave settlers on a permanent tenure basis, to be inherited by their children.